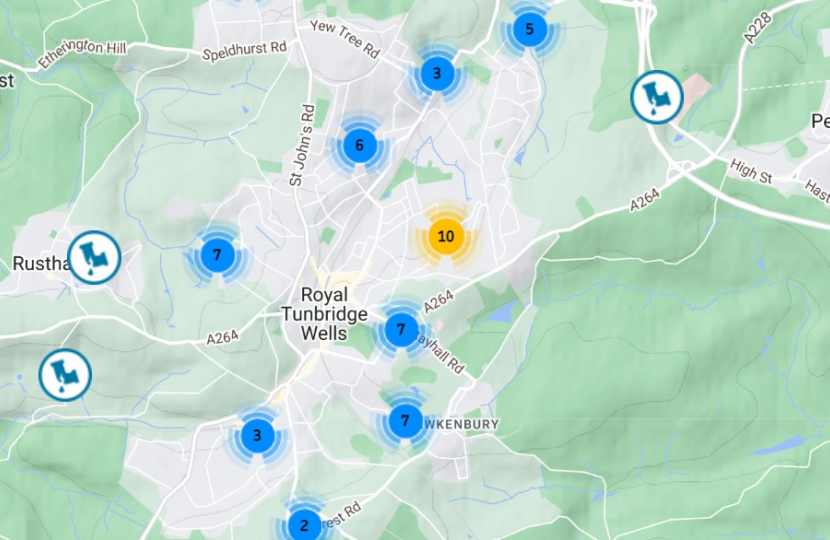 I thought you should have an update on where I think we are with South East Water in and around Tunbridge Wells.

To my - and I’m sure your – relief, the situation has finally improved for most households affected.

The return to service of the Tonbridge water treatment works, and some other measures taken, have resulted in the level of the Blackhurst Lane reservoir returning to about 67% of capacity. This, even though it falls at peak times, is above the 20 to 25% level which needed to avoid cuts to properties supplied by pumped water.

However, there are still water pipe bursts across the area – such as in Southborough in the last day – which are causing local loss of pressure and require water supplies to be turned off temporarily to repair the burst water mains.  In addition, I am told by South East Water that airlocks can stop water reaching some properties which requires the attention of their engineers to fix. If you have a problem now, or in the days ahead, this should be reported to South East Water on 0333 000 0002.

When I spoke to the Chief Executive of South East Water again this afternoon he was confident that the system will now see us through Christmas without the major disruption we have endured in the last week. But the record to date has been poor, and the system is evidently vulnerable to things going wrong. So I have asked for extra resources to be on standby for Tunbridge Wells across the Christmas period in case they turn out to be needed. I have spoken again with the Water Minister who, at my request, met with South East Water’s management, and asked her to make available support from elsewhere in the country should it be needed. The Local Resilience Forum, on which Kent County Council and Tunbridge Wells Borough Council are represented, is also standing by to assist throughout this period.

As a precaution, and to help other areas with localised outages, I have asked for the bottled water distribution centre to continue to operate at Tesco, Pembury for the next few days. I would like to repeat my thanks to the store managers at Tesco, Pembury – Jon Briley and Justin Alexander – and our local Salvation Army, led by Captain Graeme Smith and Captain Zoe Smith, for helping the community out by allowing their car parks to be used at such a busy time for them.

Looking further forward, I will work to ensure that compensation is paid promptly and fully to residents and businesses affected by the horrendous experience of the last 8 days – while recognising that financial compensation is no substitute for the privations, loss of pre-Christmas celebrations, and the worry and anxiety that people have endured.

I will also – including through the debate in the House of Commons I hope to be granted in the New Year – do everything I can to ensure that the local network and its management are improved so that we have no repeat of this, and that there will be appropriate sanctions against those responsible for the failures this time.

I hope that it won’t be necessary to update you quite so frequently during the days ahead, and that you are able to enjoy a very Happy Christmas.