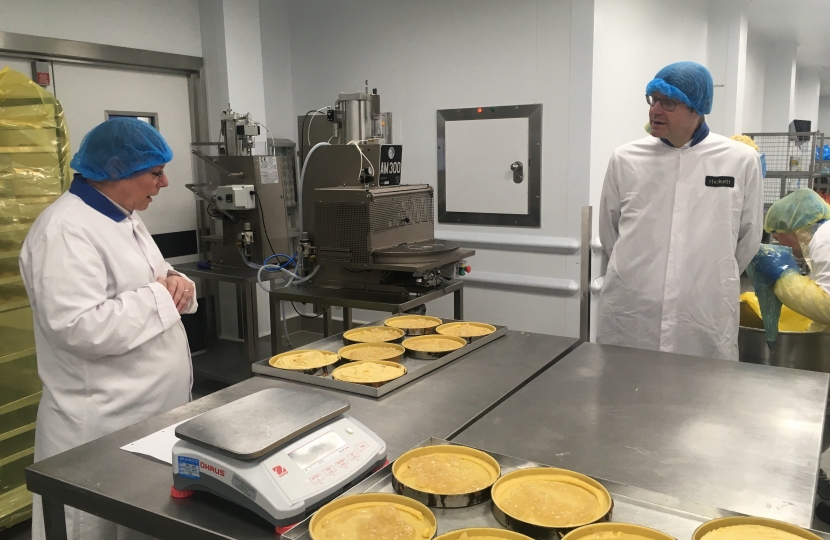 Greg was delighted to tour one of Kent's leading food production factories today, shortly after visiting a luxury hamper maker.

In what turned out to be a culinary themed day, Greg left the distillery Atom Brands and headed straight to Lamberhurst to visit the headquarters of British Fine Foods.

Founded during the height of the credit crunch by Pam and Andrew Harper, British Fine Foods has been the leading provider of deluxe picnic hampers for a range of clients, including Wimbledon, Ascot and Goodwood.

It has now moved into corporate gifts and has begun to tap its exporting potential by providing hampers to high-end clients who desire the quintessential British picnic.

Despite being founded only in 2002, Rhokett has grown to be one of the largest producers of premium deserts and is the main supplier for Marks & Spencer.

Greg was given his tour by Peter Le Voir, who co-founded the company alongside Martin Dockett and celebrity chef Gary Rhodes. He was joined on his tour by site owner Peter Dunlop.

Commenting after his visit, Greg said: "West Kent is home to some of the UK's premium food producers and I was delighted to be able to tour two such companies, British Fine Foods and Rhokett, and witness the hard work that does into making their products.

"Both are fine examples of high growth companies which excel in their chosen fields and I look forward to hearing more about their success in the future."