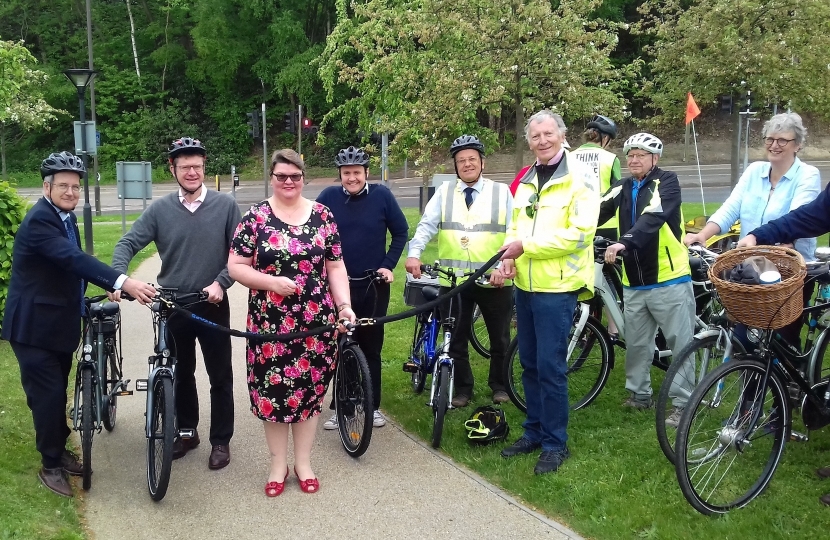 Greg, along with his neighbouring MP for Tonbridge & Malling Tom Tugendhat, officially opened a new offroad cycle path which provides a brand new link between Tonbridge and Tunbridge Wells along the route of the A21. The new cyclepath links to Tunbridge Wells via North Farm Industrial Estate and Pembury Hospital. There is an existing cyclepath along the Pembury Road into the centre of the town.

"This new offroad cycle path is a fantastic opportunity for people to cycle to work or for leisure. It's a great addition to the local cycle network."

"We campaigned hard to have a cyclepath as part of the A21 dualling scheme and also that it should include links at either end to Tonbridge Station and Pembury Hospital. These links were crucial for it to be a successful commuting route for cyclists so I pressed Highways England to fund the two links and they agreed to do so.

"It's initiatives like this that encourage people to get on their bikes rather than use the car so I'm delighted to see the route finally open."

After the official opening, Greg along with Tom Tugendhat, local councillors and members of local cycling groups, undertook an informal bike ride along the new cyclepath.

Commenting on his ride, Greg said:

"In spite of the rain, we had a brilliant time riding the new cyclepath. There were people on tandems, on electric bikes and with young children in trailers. It's only a couple of miles long so very commutable. I really enjoyed using an electric bike – especially up the hills! We need to get the word out so that people know it's there and might consider cycling between Tunbridge Wells and Tunbridge, instead of jumping in the car."

A pedestrian/cycle counter, using the latest technology, has been installed on the route which will automatically record the number of users.