Memories of Her late Majesty the Queen 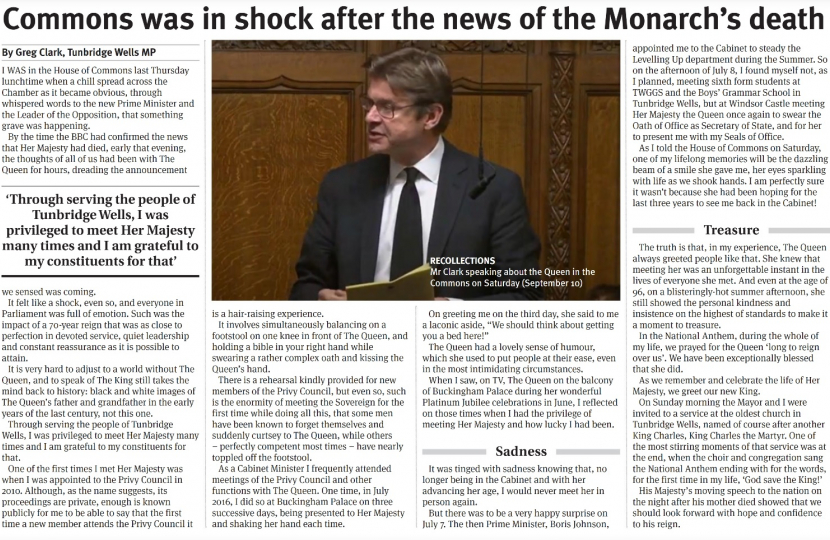 I was in the House of Commons last Thursday lunchtime when a chill spread across the Chamber as it became obvious, through whispered words to the new Prime Minister and the Leader of the Opposition, that something grave was happening.

By the time the BBC had confirmed the news that Her Majesty had died, early that evening, the thoughts of all of us had been with the Queen for hours, dreading the announcement we sensed was coming.

It felt like a shock, even so, and everyone in Parliament was full of emotion. Such was the impact of a 70 year reign that was as close to perfection in devoted service, quiet leadership and constant reassurance as it is possible to attain.

It is very hard to adjust to a world without The Queen, and to speak of The King still takes the mind back to history: black and white images of the Queen’s father and grandfather in the early years of the last century, not this one.

Through serving the people of Tunbridge Wells, I was privileged to meet Her Majesty many times and I am grateful to my constituents for that.

It involves simultaneously balancing on a footstool on one knee in front of the Queen, while holding a bible in your right hand while swearing a rather complex oath and kissing the Queen’s hand.

There is a rehearsal kindly provided for new members of the Privy Council, but even so such is the enormity of meeting the Sovereign for the first time while doing all this that some men have been known to forget themselves and suddenly curtsey to the Queen, while others - perfectly competent most times - have nearly toppled off the footstool.

As a Cabinet Minister I frequently attended meetings of the Privy Council and other functions with the Queen. One time, in July 2016, I did so at Buckingham Palace on three successive days, being presented to Her Majesty and shaking her hand each time.

On greeting me on the third day, she said to me a laconic aside, “we should think about getting you a bed here!”

The Queen had a lovely sense of humour, which she used to put people at their ease, even in the most intimidating circumstances.

When I saw, on TV, the Queen on the balcony of Buckingham Palace during her wonderful Platinum Jubilee celebrations in June, I reflected on those times when I had the privilege of meeting her Majesty and how lucky I had been.

It was tinged with sadness knowing that, no longer being in the Cabinet and with her advancing her age, I would never meet her in person again.

But there was to be a very happy surprise on 7th July. The then Prime Minister, Boris Johnson, appointed me to the Cabinet to steady the Levelling Up department during the Summer. So on the afternoon of the 8 July, I found myself not, as I planned, meeting sixth form students at TWGGS and the Boys’ Grammar School in Tunbridge Wells, but at Windsor Castle meeting Her Majesty the Queen once again to swear the Oath of Office as Secretary of State and for her to present me with my Seals of Office.

As I told the House of Commons on Saturday, one of my lifelong memories will be the dazzling beam of a smile she gave me, her eyes sparkling with life, as we shook hands. I am perfectly sure it wasn’t because she had been hoping for the last 3 years to see me back in the Cabinet!

The truth is that, in my experience, the Queen always greeted people like that. She knew that meeting her was an unforgettable instant in the lives of everyone she met. And even at the age of 96, on a blisteringly hot Summer afternoon, she still showed the personal kindness and insistence on the highest of standards to make it a moment to treasure.

In the National Anthem, during the whole of my life, we prayed for the Queen “long to reign over us.” We have been exceptionally blessed that she did.

As we remember and celebrate the life of Her Majesty, we greet our new King.

On Sunday morning the Mayor and I were invited to a service at the oldest church in Tunbridge Wells, named of course after another King Charles, King Charles the Martyr. One of the most stirring moments of that service was at the end, when the choir and congregation sang the National Anthem ending with for the words, for the first time in my life, “God save the King!”

His Majesty’s moving speech to the nation on the night after his mother died showed that we should look forward with hope and confidence to his reign.