21 December: An update from Greg on South East Water 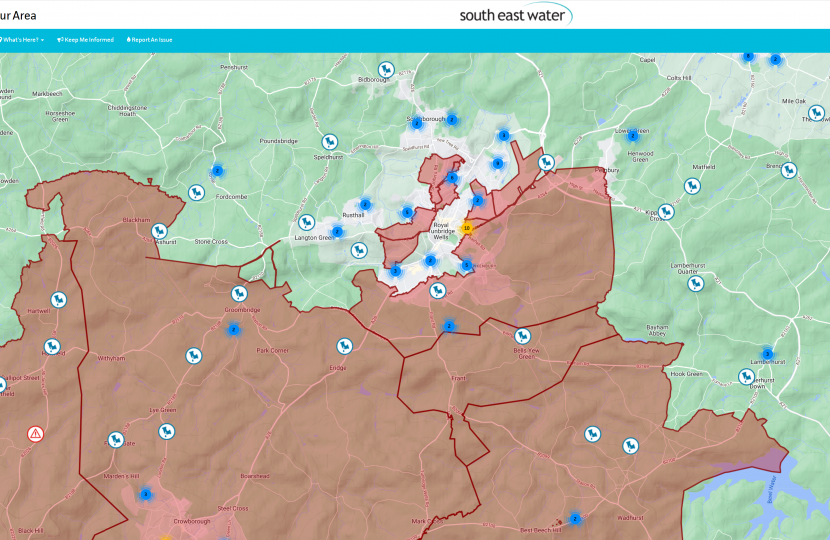 I wanted to update you on the latest that I know about the ongoing appalling situation with South East Water.

The handling of the situation by South East Water has been, and continues to be, unacceptably bad and in some instances chaotic.

I have spoken with the Minister for Water, Rebecca Pow MP, and asked for the Government to intervene with South East Water to inject better capability from other companies and from the Department to handle and resolve the situation here.

I have also spoken to Roger Gough, the Leader of Kent County Council, to ask that their experience of emergency responses is made available to be used in this incident.

Neither should be necessary. In my view, a company providing an essential service – and there is none so essential as providing running water to people – should have well-designed and well-rehearsed plans for when things go wrong, including leadership, operations and communications. South East Water has shown itself to be deficient in all of these.

I want to address two problems in particular in this update: the supply of water itself, and the arrangements for bottled water to be supplied to people without tap water.

I have spoken every day with the Chief Executive of South East Water, David Hinton. I wish I could tell you that I am confident that reliable supplies will be resumed imminently, but I’m afraid I can’t.

In my last email (which you can read here) I described the basic engineering problems, so I won’t repeat that here – it still applies, and the reservoir at Blackhurst Lane is too low to supply all households adequately.

There is some good news since my email on Monday, in that the Tonbridge Water Treatment works – which was flooded last month and supplies the Blackhurst Lane reservoir – has passed the tests of water quality and is, as of last night, pumping water to Tunbridge Wells.  However, South East Water told me yesterday that there are still major unexplained losses of water. They assume this is from a number of big leaks somewhere on the network that they have not been able to find, probably resulting from frozen pipes last week. That means that there is as much water leaving the reservoir as filling it, so that the problem of supply persists. This is a depressing conclusion, which means there is no end in sight, but I don’t want to hide from you my own assessment from these calls.

This means that the need to get bottled water to everyone affected is especially important. Frankly, yesterday was farcical on that. The Tesco Pembury site was overwhelmed – not surprising since South East Water had only one other site open (in East Grinstead) covering Kent and Sussex, many areas of which were affected. The water ran out, and the carpark was gridlocked. Tesco then – understandably – said that the disruption to their business was intolerable and things needed to improve. Very kindly they have agreed to let their carpark to continue to be used, and supplies were finally delivered at 11.45pm last night.

As you know, I have been pressing for another site closer to the centre of Tunbridge Wells to be made available for those without transport to Pembury.

Finally a site was opened at the Salvation Army in Bayhall Road last night. I’m very grateful to the Tunbridge Wells Salvation Army for allowing this, and for the efforts of Tunbridge Wells Borough Council Chief Executive William Benson, who has been working flat out, including very late last night, on helping with the supply of bottled water. I also discussed with William Benson providing facilities for people to shower and he has kindly agreed to look at opening the St John’s Leisure Centre for this later today.

It is important to note that for bottled water priority services are available for the vulnerable or disabled, as well as those with children under 5. You can sign up here.

As I said at the top of this email, all of this paints a picture of a company that I don’t feel can be trusted to get the basics right in responding to this emergency, which is why I have asked for outside help from the Minister and – through the Government and Kent County Council – from other bodies with relevant experience.

I know how big an impact this is having on everyone, at a time of the year in which people were hoping to enjoy themselves.

I have told the South East Water Chief Executive – and I will be speaking to him again this afternoon – that I expect compensation to be paid quickly and straightforwardly, and there needs to be a robust plan implemented to make the system robust against this in the months ahead, as well as in the long term.

But I realise that compensation and future resilience don’t solve what is an emergency right now, and I will not let up in doing everything I can to try to get it resolved.