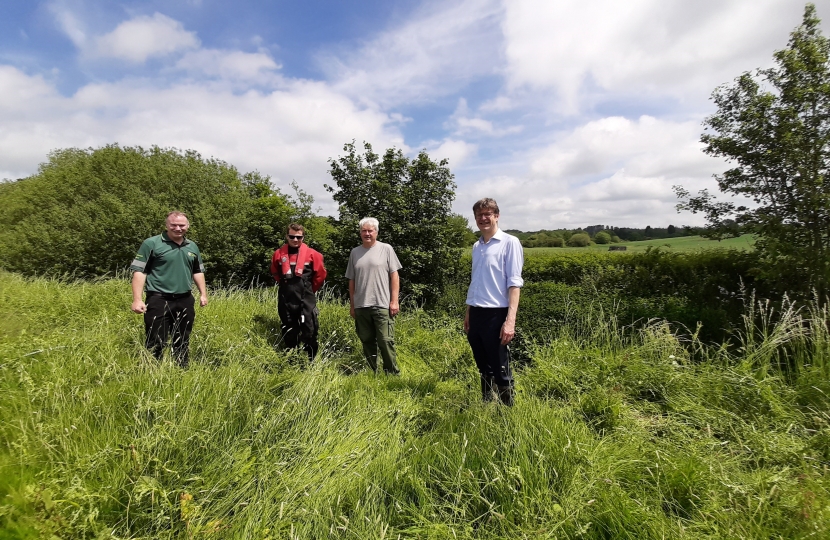 Greg visited the Eridge Stream – a tributary of the Upper Medway river – to see for himself the work that has been done by the Dorset Arms’ Angling Club, The Wild Trout Trust and the Environment Agency to improve the habitat for fish.

The Dorset Arms’ Angling Club – of which Greg is Vice President – contacted Greg to raise concerns about declining fish populations.  They were worried that there might have been a pollution incident but this proved not to be the case.  The decline in numbers appears to have been the result of changes to the river habitat including maintenance dredging which had removed gravels needed by spawning fish and barriers like weirs which prevented the movement of fish searching for suitable spawning sites.

Around 100 tonnes of iron stone gravels were deposited into the river and sections of tree trunks were nailed to the riverbed to prevent the gravel being washed away and create ripples and faster flowing waters which fish like brown trout prefer.

In total, four new spawning sites have been created.

“It was great to see how everyone has worked together to make these improvements to the Eridge Stream.    The Environment Agency will be undertaking some surveys of both the fish and other river life to see what the impact has been - initial observations from the Environment Agency’s Fisheries Team is that they are already starting to see more wildlife in the stream which is fantastic.”

At 6,500 square feet, the warehouse will allow the company - which specialises in producing concentrated hop extract - to increase its headcount to 30.