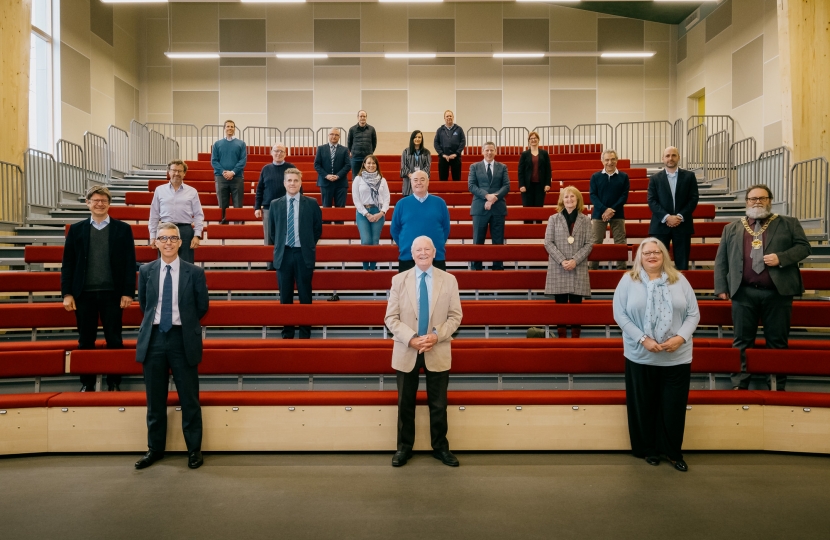 Greg attended the official handover of the newly built Southborough Civic Centre from the contractor to the town today, 18 months after work on the £10 million project first began.

He was joined by representatives of the three councils involved in the project - Kent County Council, Tunbridge Wells Borough Council and Southborough Town Council - as well as staff from Paddock Wood developer, Baxall Construction, which has overseen the project.

The Southborough Civic Centre - the officai name for the development adopted by the town council on 8 March - will provide a new hall/theatre, library, retail unit, GP surgery and community rooms for local residents. A new pavilion for Tunbridge Wells Youth Football Club has also been provided as part of the project.

A significant portion of funding for the scheme was provided by NHS England. Greg convened an urgent meeting of the organisations participating in the programme in August 2019 following concerns that the deadline to acquire the funding would be missed and successfully brokered a deal which allowed a bid for funding to be submitted.

Furnishing of the interior of the Civic Centre is expected to take around seven weeks.

Greg said: “I congratulate everyone involved in bringing this impressive project to fruition. Having worked with Kent County Council, Tunbridge Wells Borough Council, Southborough Town Council and community groups to get the funding in place I have been eagerly following the progress of the building. It was a pleasure to finally take a look inside. The local contractors, Baxalls, have done a wonderful job. It is a superb facility and I am sure the residents of Southborough will be as impressed as I am when they are able to come and use it.”

Tunbridge Wells benefits when we support Afghans fleeing the Taliban

In today's column for the Times of Tunbridge Wells, Greg outlines the moral case for helping Afghans fleeing the Taliban and what measures are being taken to support them.